Case study: No Ban No Wall Sanctuary for All

Design Action Collective is made up of organizers and activists. Our Collective is also a member of Third World Resistance — a network of anti-imperialist organizations based in the Bay Area dedicated to the struggle for black power and internationalism. Through this relationship with Third World Resistance, we were in conversation with local immigrant rights leaders and organizations across the country as we were all responding to the impact of Trump’s election.

During his campaign, Trump threatened “a total and complete shutdown of Muslims entering the United States.” While immigrant rights activists did not know exactly how this would be implemented, we knew that the executive order was imminent after Trump’s inauguration on January 20, 2017.

On January 26, 2017 Design Action members joined immigrant rights organizations and members of the San Francisco Board of Supervisors as folks convened on the steps of San Francisco City Hall in front of news cameras just hours after the first Muslim Ban Executive Order came down. Activists and leaders stood in solidarity with all immigrant communities and committed to resisting this ban. People shared stories of surviving the racist NSEERS program under President Bush – making it clear that Trump’s Executive Order had nothing to do with national security and everything to do with terrorizing Muslims and immigrant communities. The national organizing efforts culminated in a clear message tying together resistance to the Mulsim Ban with resistance to the militarization of the Southern border, and demanding sanctuary for all people. The chant “No Ban, No Wall, Sanctuary for All!” had already been spreading across the country, and was shouted from the steps of San Francisco City Hall that day. We headed back to our Oakland office knowing that a bold graphic could help amplify this message. After a quick huddle, our design team created an image that could be easily shared on social media and downloaded for large format printing. We made the image free for anyone to use. 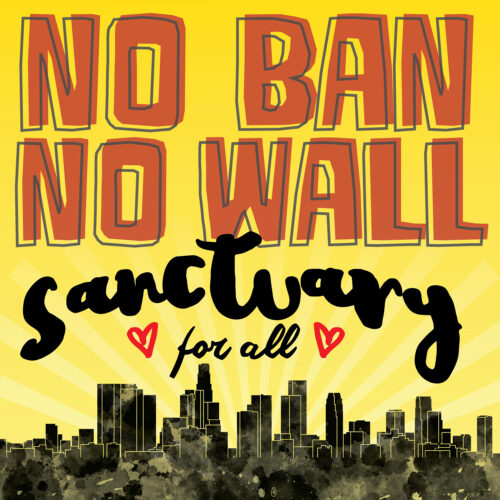 Two days later on January 28th, Trump’s Muslim Ban went into effect and protesters flooded airports across the country to demand a release to all the detainees and a repeal of this racist order. Arab Resource and Organizing Center, the Alliance of South Asians Taking Action, and other members of Third World Resistance helped to lead the protest at the San Francisco International Airport. Thanks to the efforts of Bay Rising and other mobilizing networks the crowd swelled over the course of a few hours. Design Action was able to distribute copies of the poster so that all the media coverage of that day centered the clear message of solidarity with clear demands. 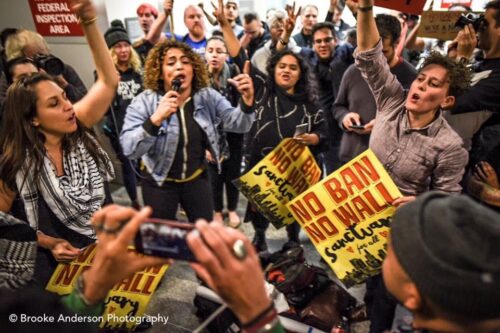 As protesters continued to show up over the following days, people brought their own version of the No Ban No Wall poster — in some cases mimicking the typography of our original image. Eventually, all detainees at SFO were released. 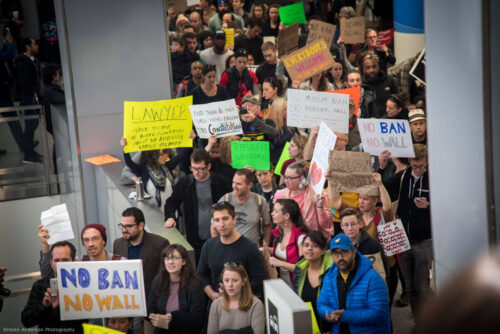 Resistance work intensified over the following months and years as the Trump administration began it’s program to separate refugee families and jail children. The No Ban No Wall message continued to ring throughout the streets. 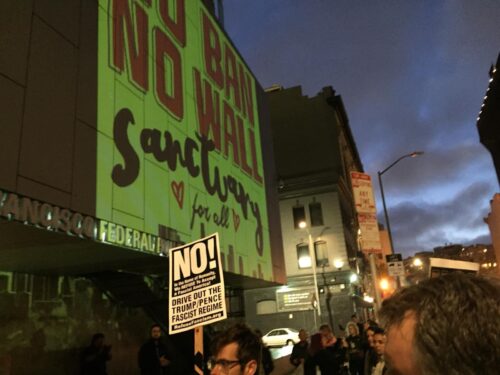 While the Muslim Ban was ultimately upheld by the courts, the Trump administration did relent on the greencard issue. Had it not been for the protests, countless more families would have been impacted by the Ban. The work to abolish ICE continues, the work to abolish prisons and police continues, and the long term work of solidarity and resistance continues. Design Action is grateful to be part of this movement as we develop strategic messages, effective visuals, and build power for our communities.